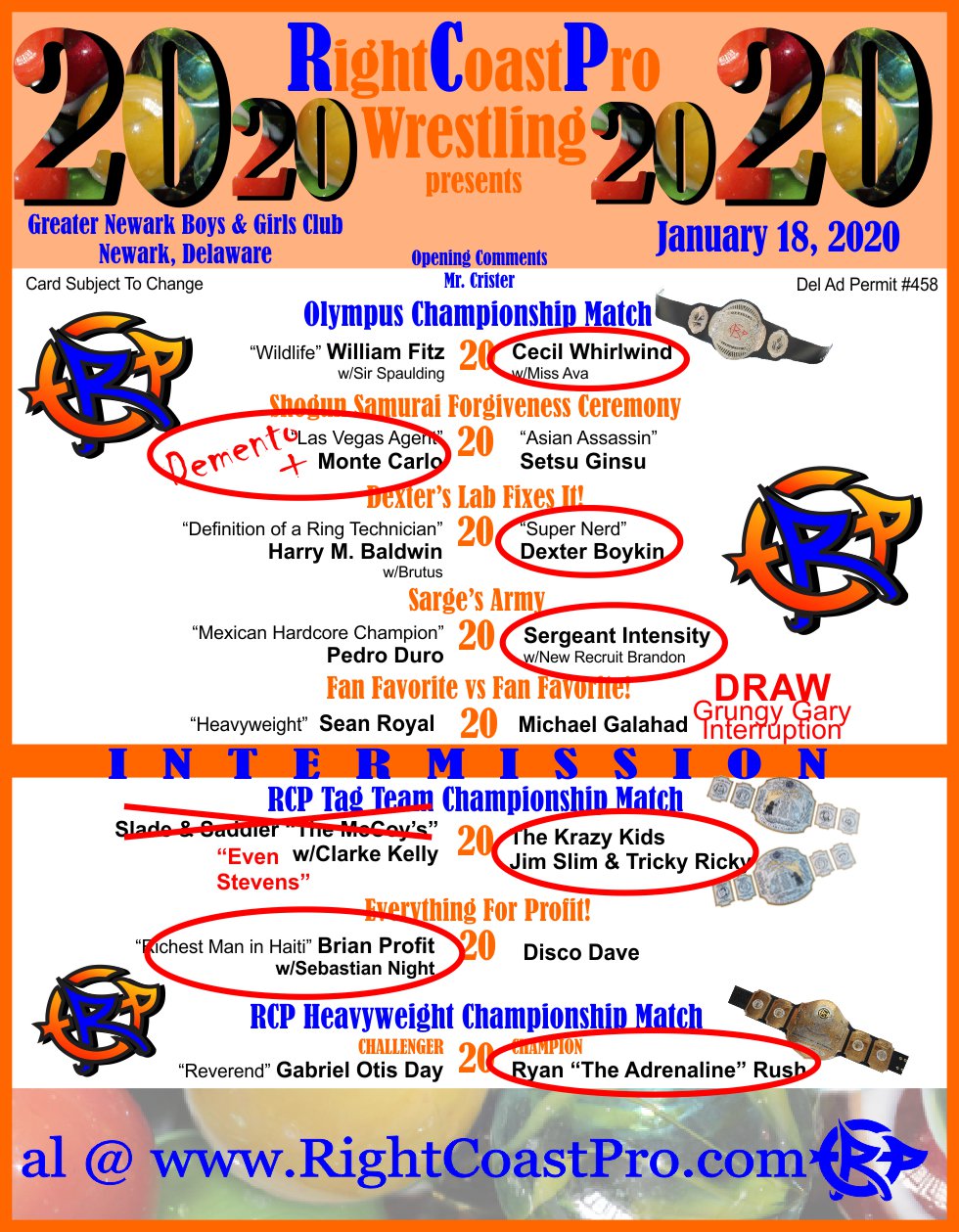 Thank You Delaware for another spectacular Live Event at the RCP Arena aka the Greater Newark Boys and Girls Club. Official Attendance: 285 Detailed Match Results w/ Stiehl Photography Images below. 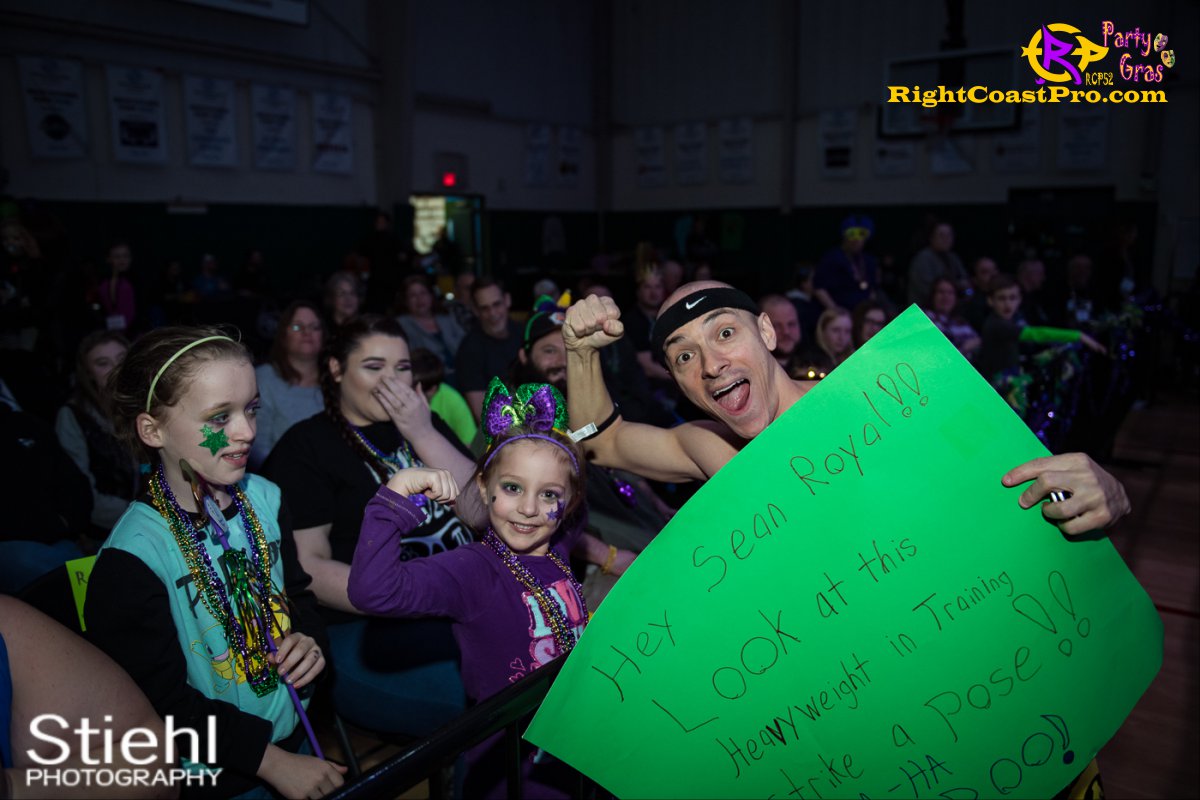 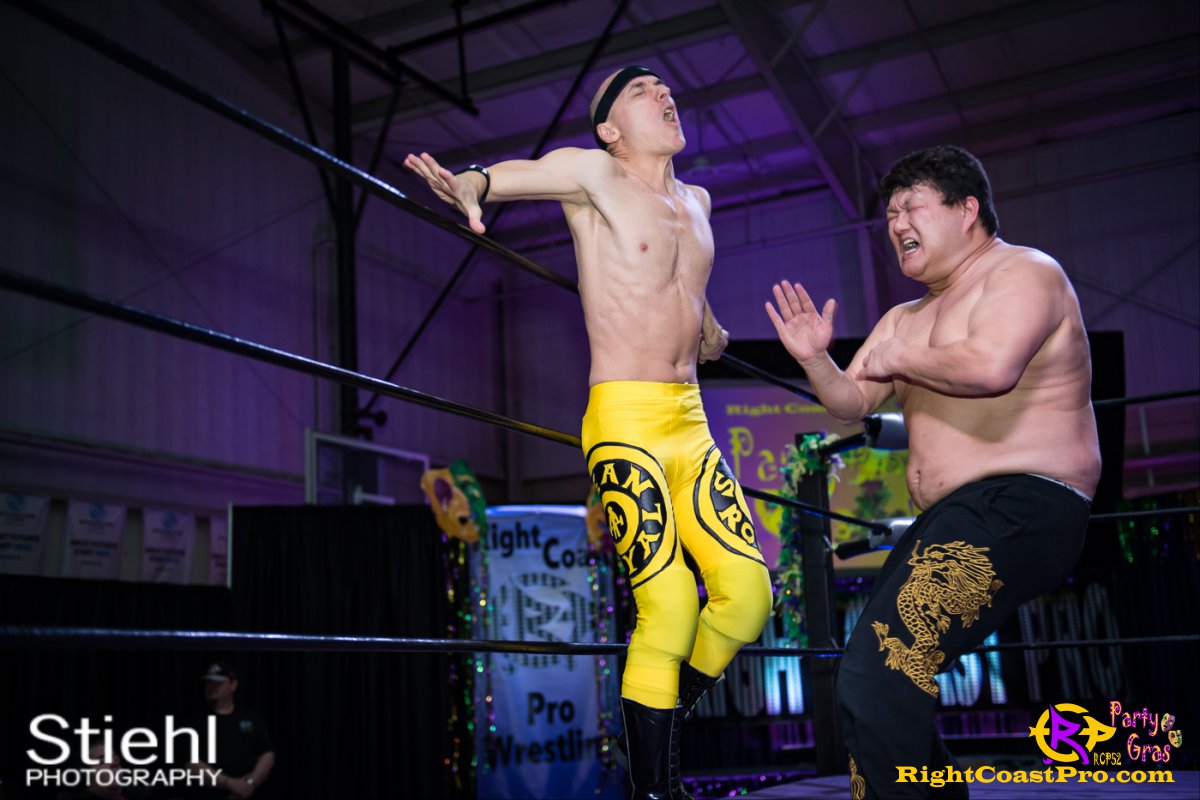 The Asian Assassin Setsu Ginsu has looked unbeatable over the past few months, winning his matches through a variety of devious means. 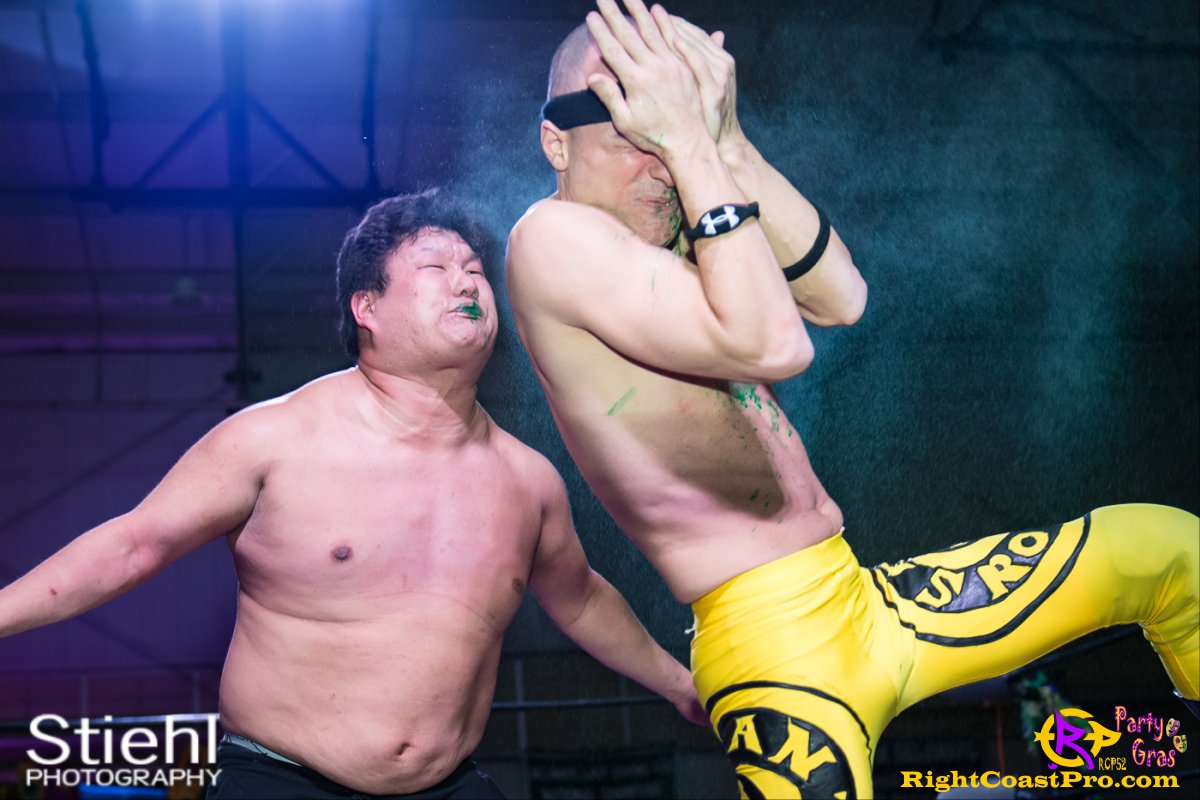 The long awaited rematch with former Olympus Champion Heavyweight Sean Royal turned out ot be no different. It was the start of Right Coast Pro Wrestling in Delaware’s Party Gras Event, and these two athletes started the night off at top speed. It was a hard hitting, extremely competitive combative match. 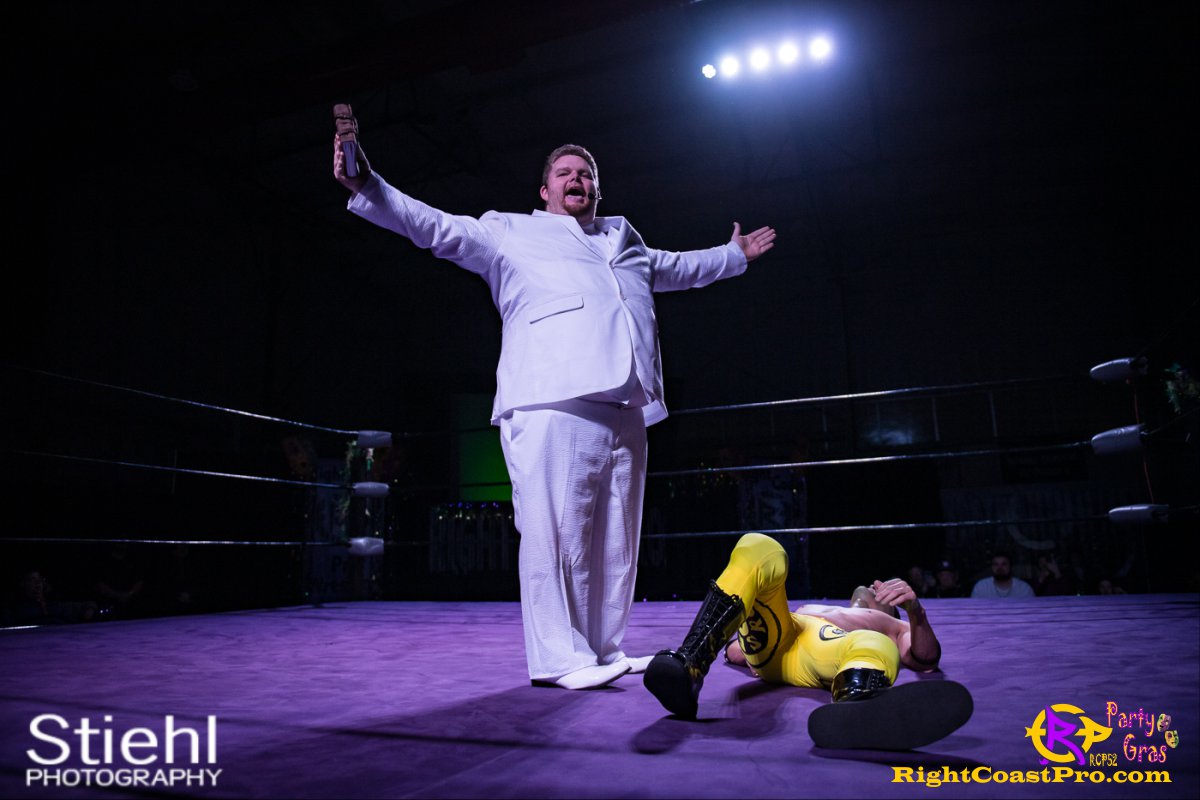 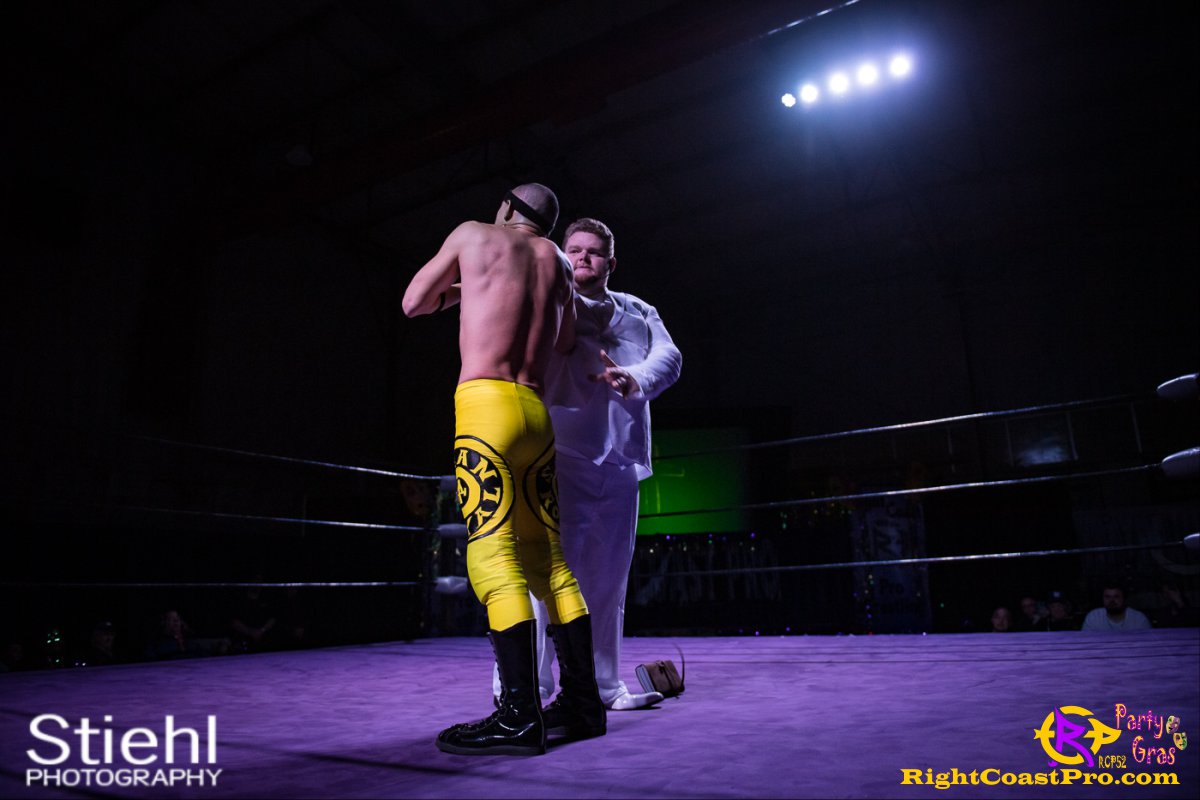 In the midst of his celebration of winning the Right Coast Pro Wrestling Championship for a second time, The Heavyweight Sean Royal felt the wrath of G.O.D.

Tickets are on Sale Now! Match Announcements Forthcoming all week!

Miss our last Event? Check out our 'Quick Recap' Video:

The Krazy Kids vs The Baldwin Brothers - Losing Team Must Break up until M&M lose the Tag Belts!

The Russian Urie Graygory vs The Strategist Just Neph

Just Back from an International Tour and Las Vegas Residency, Photographer Jim Stiehl of Stiehl Photography in Delaware

Our Musical Guest will be County Recording Artist Patrick Liberatore 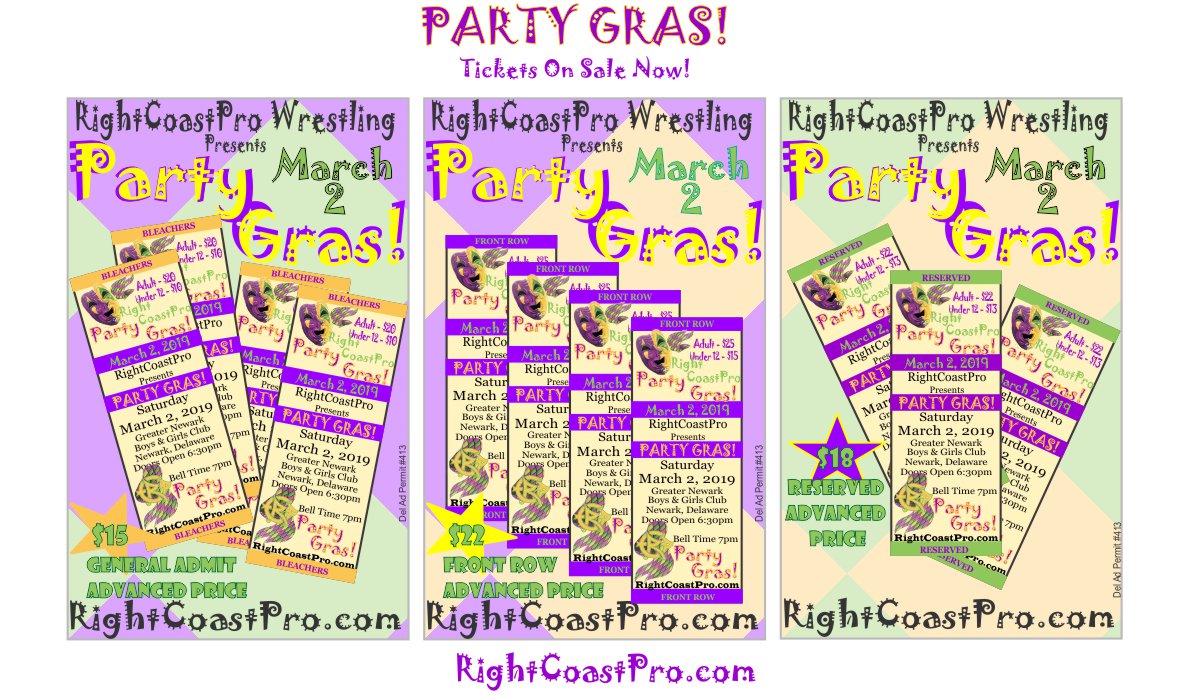 RightCoastPro features pro wrestling as you remember it, and we believe Quality and Community does matter.

Discount Tickets are available online and of course you can buy tickets at the door.

We hope to see you there!

Right Coast Pro Wrestling in Delaware “A NEW QUEST” Event Results from January 19, 2019 at the Greater Newark Boys & Girls Club where we blast off into the New Year with a bang! 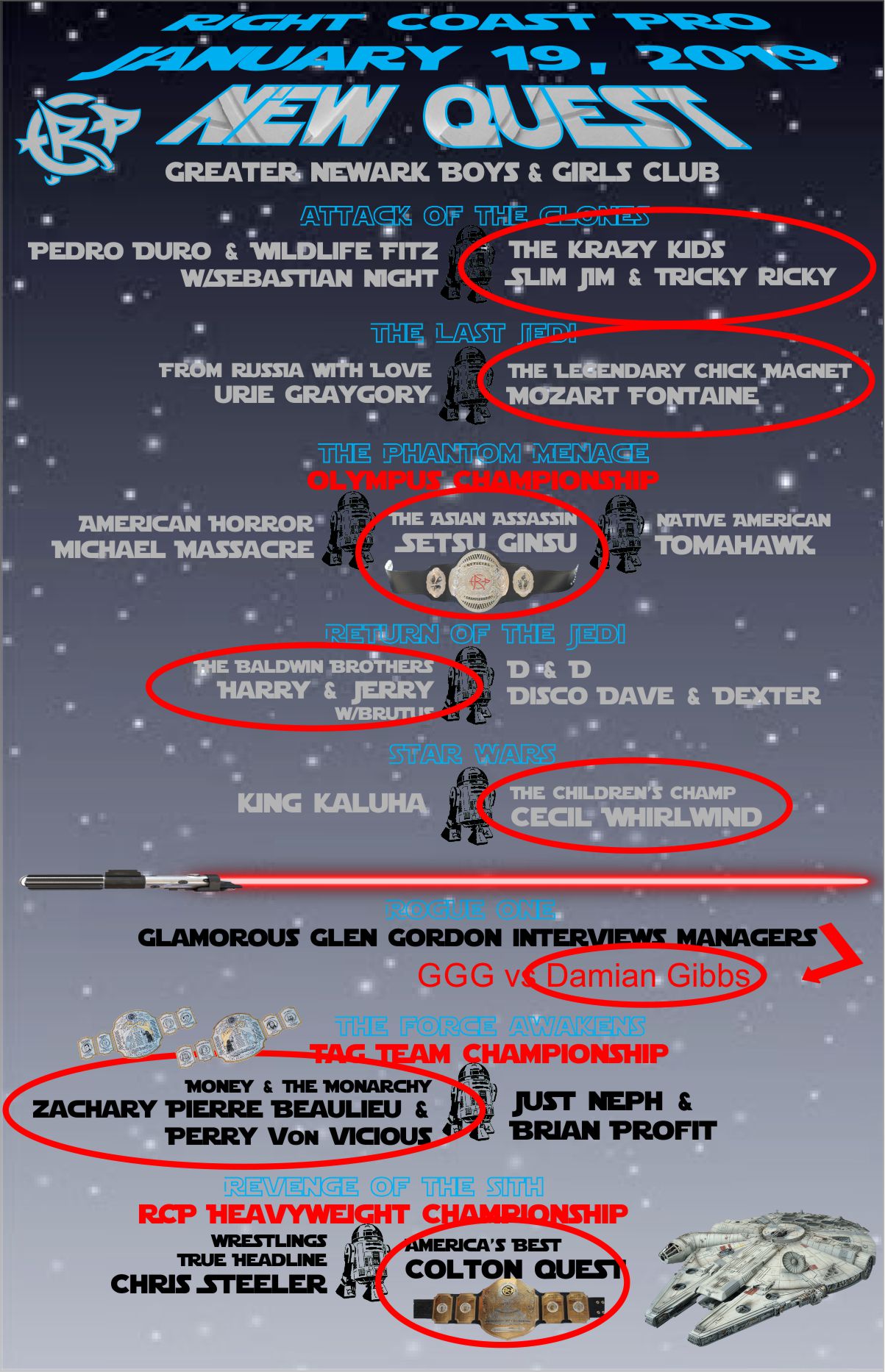 Lots of action and drama marked the first event of 2019 in front of the packed house of fans.

1. Opening the show was “The Krazy Kids” Jim Slim & Tricky Rickey dressed as Wookies from Star Wars donning glow sticks to battle Sebastian Nights newest team – Pedro Duro and the Savage “Wildlife William Fitz”. The “Kids” were victorious and took the win over the semi-dysfunctional team of Duro & Fitz.

2. Next up was Urie Graygory facing “The Chick Magnet” Mozart Fontaine. Each were holding their own until Glamazon “M” interfered with the ref and broke up the count. Neither contestant knew what was going on, obviously the Glamazon had it in for Ref Nicki and wasn’t siding with either competitor. In the end, the distraction caused Urie Graygory the match. Mozart Fontaine gets the pinfall.

5. The returning veteran King Kahlua made a huge impact by insulting and riling up the crowd, especially the kids. His opponent, “The Childrens Champion” Cecil Whirlwind, joined forces with the kids and used their energy to propel him through the match. It was a nail biter ending to the match, but in the end, the distraction and noise from all the kids surrounding the ring just threw Kahlua off his game. Cecil Whirlwind wins by pinfall.

6. Glamorous Glenn Gordon was on the search for a new manager – and possibly a new Glamazon. Ref Nicki returned the favor from earlier and chased the Glamazon from Glenn’s side for no apparent reason. Glen was presented with 4 candidates for his manager position. First was a definite NO, 2nd & 3rd were maybes, and 4th was a YES. That YES candidate turned out to be Damian Gibbs in costume. While unbeknownst to Glen, his new manager booked an impromptu match against SURPRISE! Damian Gibbs! Gibbs actually took advantage of the situation and made a fool of G.G.G. It wasn’t really a wrestling match but more so a “who can look more foolish” match! 3G. ended up tapping out leaving Gibbs the victor!

7. The RCP Tag Team Champions “Money and the Monarchy” defended their titles against the newest team of Brian Profit and JustNeph. Lead to the ring by their new manager – Johnny Torres – M & M stated once again that they are not signing the contract that the Krazy Kids have been chasing them with all evening. The match was fast-paced and hard hitting, either team could have walked away the victors. M & M had the slight advantage since they’ve worked together for so long vs Profit & Neph who were just together for the first time. Add in a Michael Massacre run in contracted by Jason Wilson and you have the RCP Tag Team Championship remaining with Money & The Monarchy as the got the final pin.

8. The RCP Heavyweight Champion Colton Quest had his hands full facing the longest reigning RCP Heavyweight Champ – Chris Steeler! Steeler is back with a vengeance and did about everything he could muster to take the title back. The brutal match up could have ended at any spot, with any move and the crowd was on the edge of their seats the whole time. To heat things up even more, Quest got the pinfall and counted 1-2-3, but there was evidence that Steeler had his foot on the rope! This controversial ending is sure to lead into additional drama as Steeler has already assaulted the referee and everyone in his way of getting the decision reversed in his favor! The crowd was left stunned and split in their alliances!

More Videos as well as Event Pictures forthcoming. Be sure to check back daily for updates.

Quality Matters when it comes to Sports and Entertainment Options on Saturday Nights in Delaware!

Money and the Monarchy went into Right Coast Pro Wrestling’s “A New Quest” Event at the Greater Newark Boys and Girls Club thinking victory was all but guaranteed. Instead want they found was two former foes putting bygones aside for a common goal,The RCP Tag Team Championship.

Money and the Monarchy, Zachary Pierre Beaulieu and Perry Von Vicious introduced us the their manager Johnny Torres who ‘arranged’ for Michael Massacre

It was a hard hitting affair that seemed to go in the Legendary Chick Magnet Mozart Fontaine’s favor, at least until Glamazon M decided to take issue with the referee.

The Right Coast Pro Heavyweight Champion Colton Quest had his hands full facing the longest reigning RCP Heavyweight Champ – Chris Steeler! Steeler is back with a vengeance and did about everything he could muster to take the title back at RCP’s Delaware Professional Wrestling Event at the Greater Newark Boys and Girls Club of Delaware.

Pineapple Head King Kaluha made quite the return to Right Coast Pro Wrestling in Delaware at RCP-51 “A New Quest” Event.

This veteran of the squared circle made it perfectly clear he hates beards, kids and most of all wrestlers who look like their having fun! As a result King Kaluha met the perfect opponent,

The Force was strong Saturday Night at Right Coast Pro Wrestling in Delaware’s “A New Quest” Event at the Greater Newark Boys and Girls Club of Delaware. While Money and the Monarchy continues to run away and refuse Number One contender Krazy Kids a RCP Tag Team Championship rematch,

A Nor Easter fell upon the Right Coast during RCP’s “A New Quest” Event at the Greater Newark Boys and Girls Club forcing travel delays upon The Heavyweight Sean Royal. As a result the CEO Mister Crister changed the Olympus Championship Match into a three way and what a triple threat match it was!

It was a contest between two top ranked RCP Tag Teams at Right Coast Pro Wrestling in Delaware’s ‘New Quest’ Event at the Greater Newark Boys and Girls Club of Delaware.

Former Tag Team and Individual Champions The Baldwin Brothers, The Definition of a Ring Technician Harry M Baldwin and Mr. Intensity Jerry Baldwin with Brother Brutus faced Dexter Boykin and Disco Dave D & D. In an encounter earlier in the night where the Krazy Kids were looking for Money and the Monarchy they found a rubber ducky instead.

Glamorous Glenn Gordon was on the search for a new manager – and possibly a new Glamazon after Right Coast Pro Wrestling in Delaware’s “New Quest” Event.

It was only moments after Glamorous Glenn Gordon made his entrance did Ref Nicki storm the ring and chase off Glamazon “M” from an earlier altercation.