Miss our 50th Event Celebration in December? Get caught up with Right Coast Pro Video's release of RCP-50 Highlights.

Visit our website regularly for all the latest news and event information.

Merry Christmas from all of us at RCP, We hope your holidays are Krazy Fun! 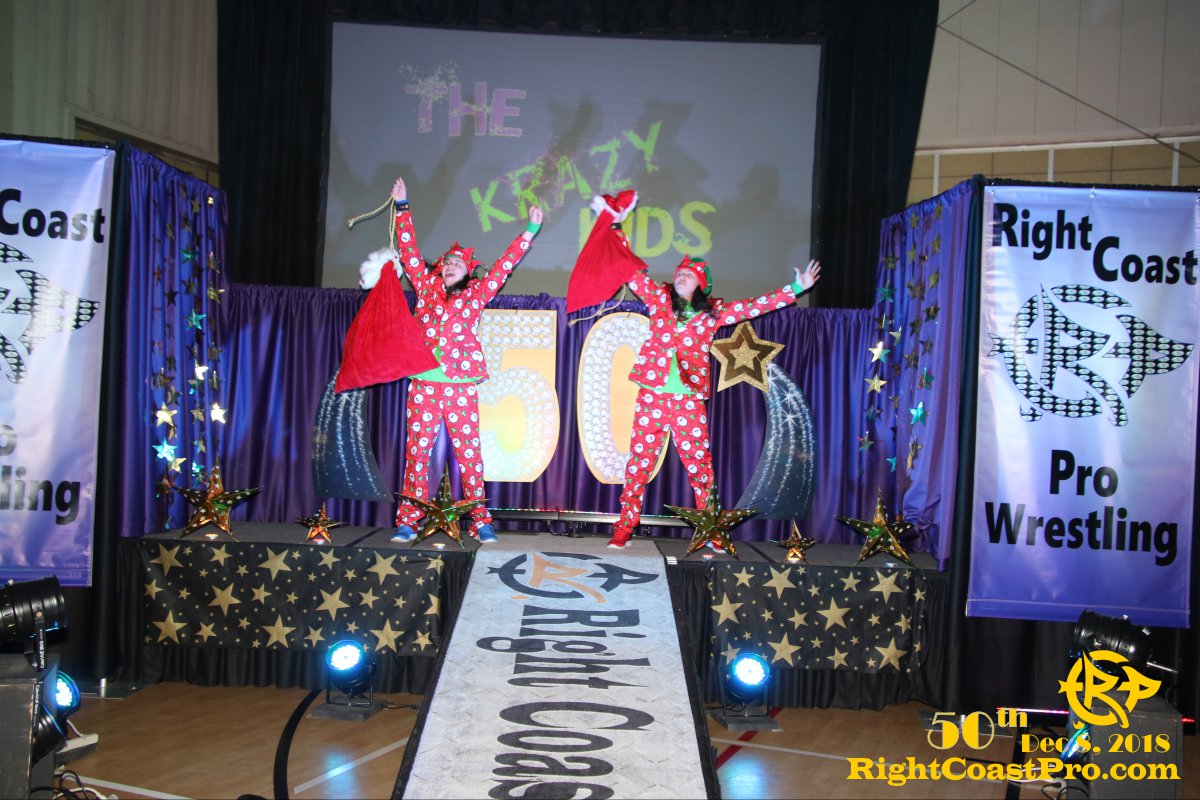 From your Right Coast Pro Wrestling Family, Merry Christmas and Happy Holidays. We truly hope everyone finds time to 'Unplug' and enjoy time with family and/or Friends.

Whatever your plans be sure to make it Krazy Fun for all involved! 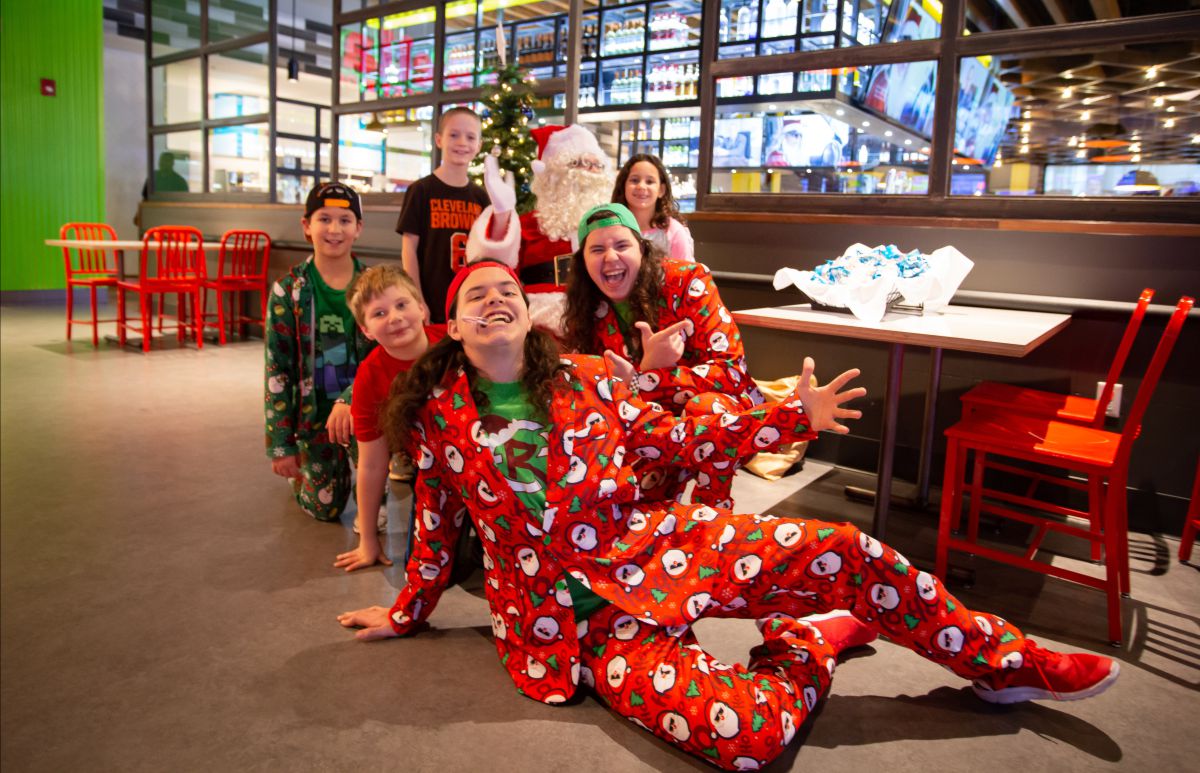 Dexter Boykin escapes with a victory over Harry M Baldwin, but then meets the Baldwins 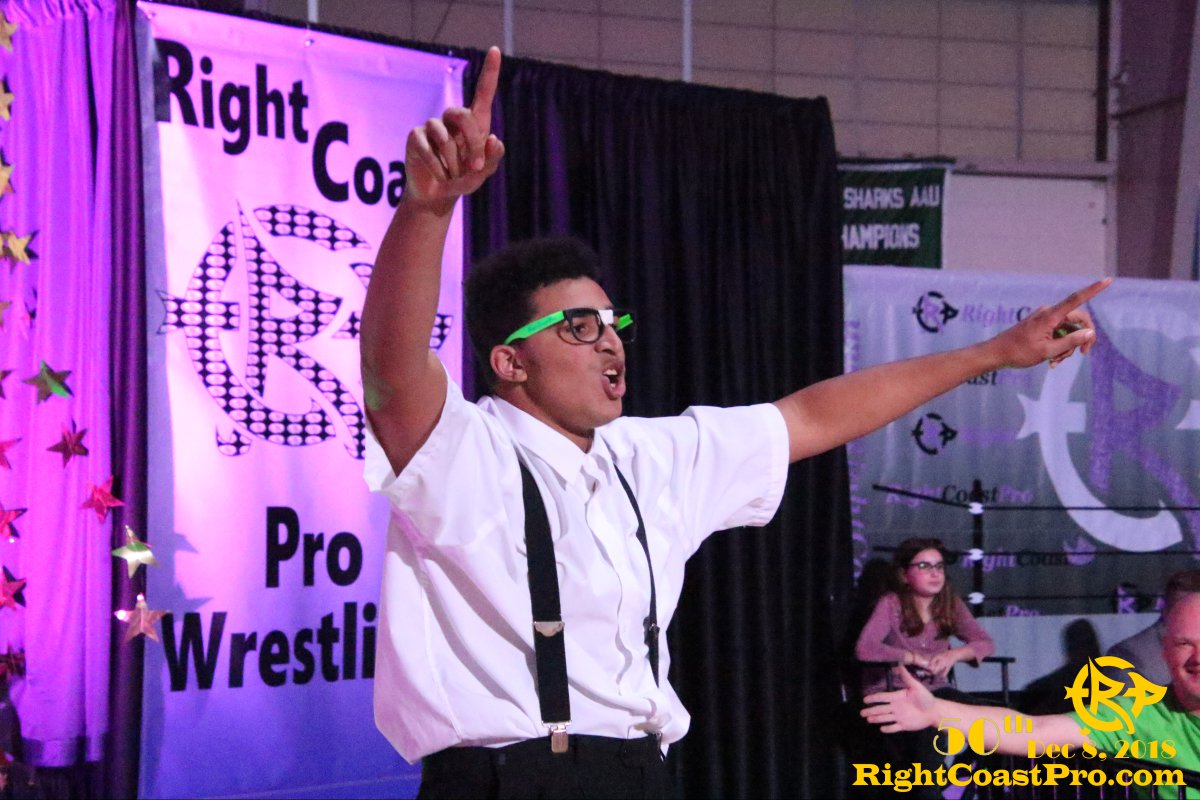 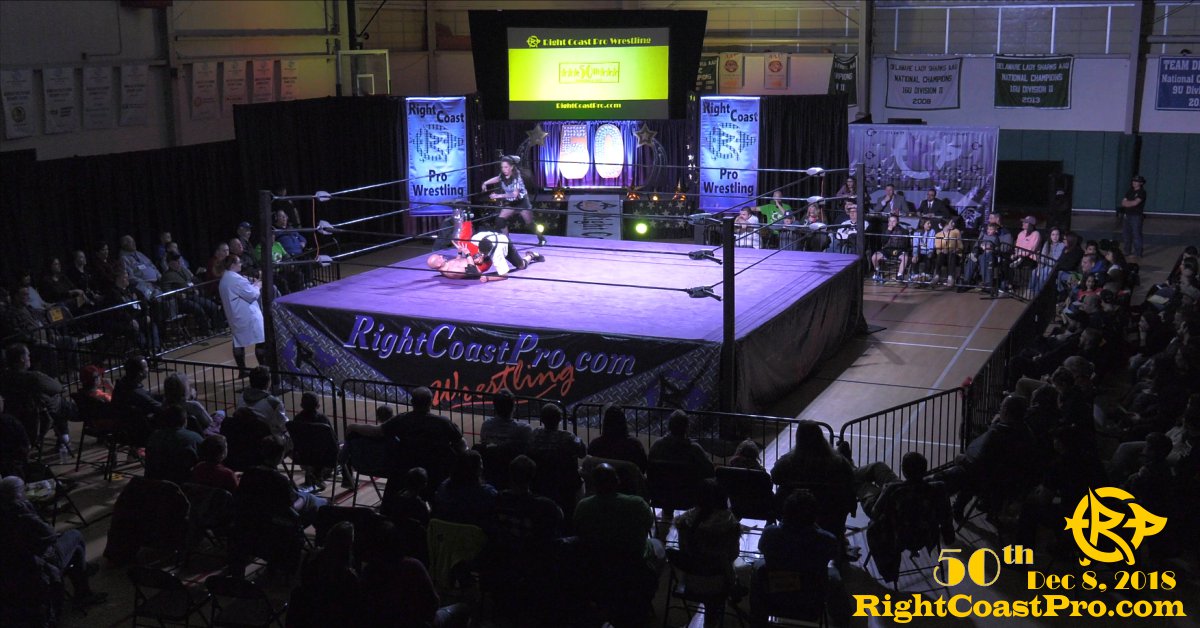 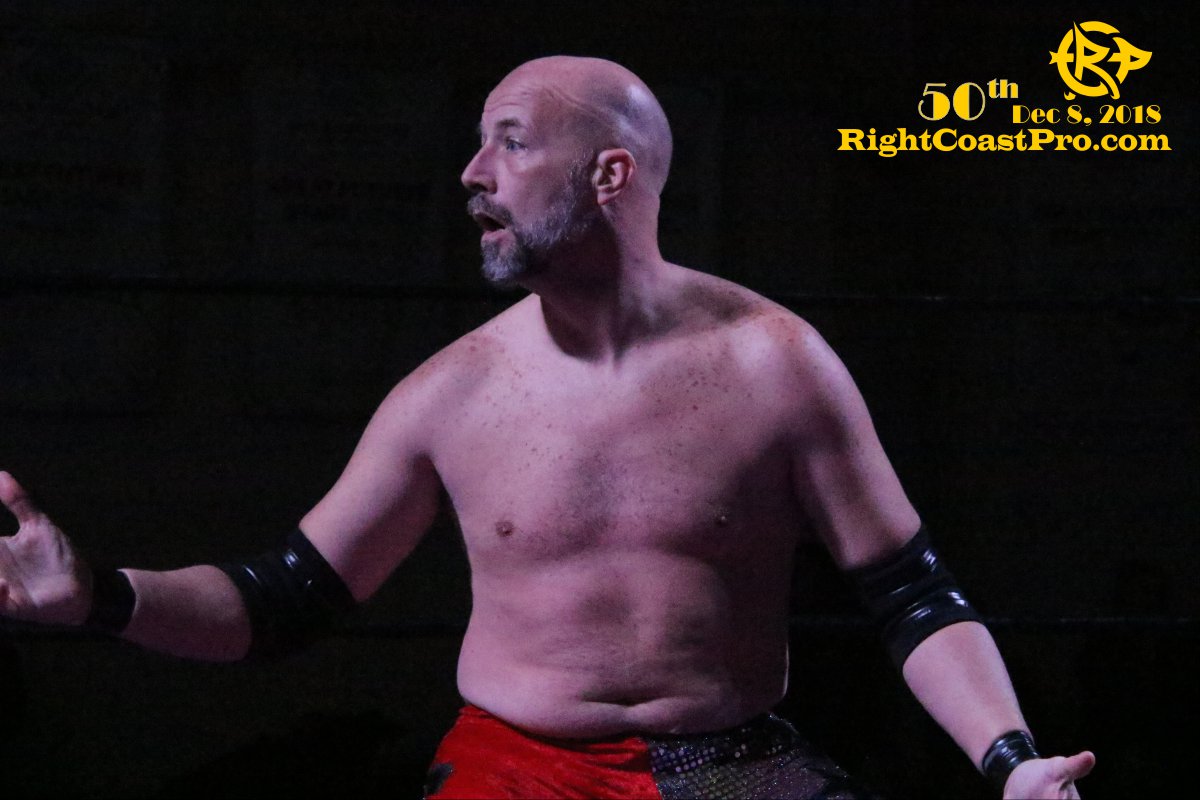 The Definition of a Ring Technician Harry M Baldwin has been searching for the key to regaining his momentum in RCP for months.

Shennanigans leave the Krazy Kids without a Title Match and Facing Mr. Wrestling 2099 and Michael Massacre. 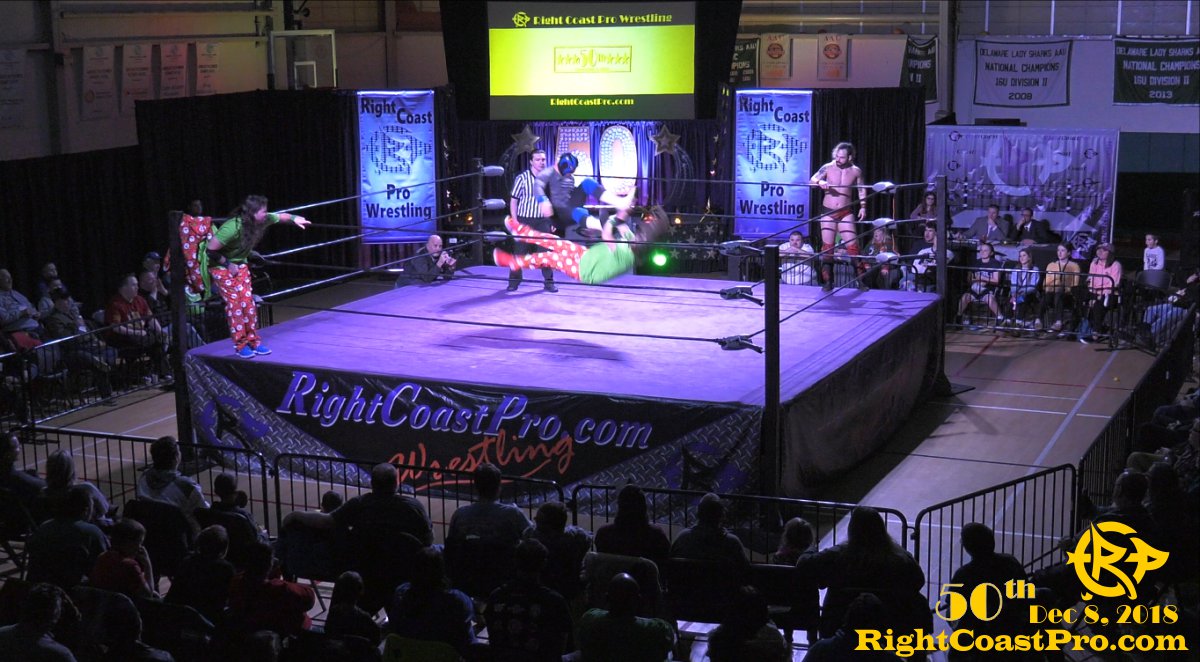 An issue with the signatures on the RCP Tag Team Championship contracts left the Krazy Kids without a rematch for the Right Coast Pro Tag Team Championship at RCP’s 50th event celebration at the Greater Newark Boys and Girls Club of Delaware. As a result of this technicality, Money and the Monarchy, bowed out of the contest instead choosing to face opponents of the their choosing. 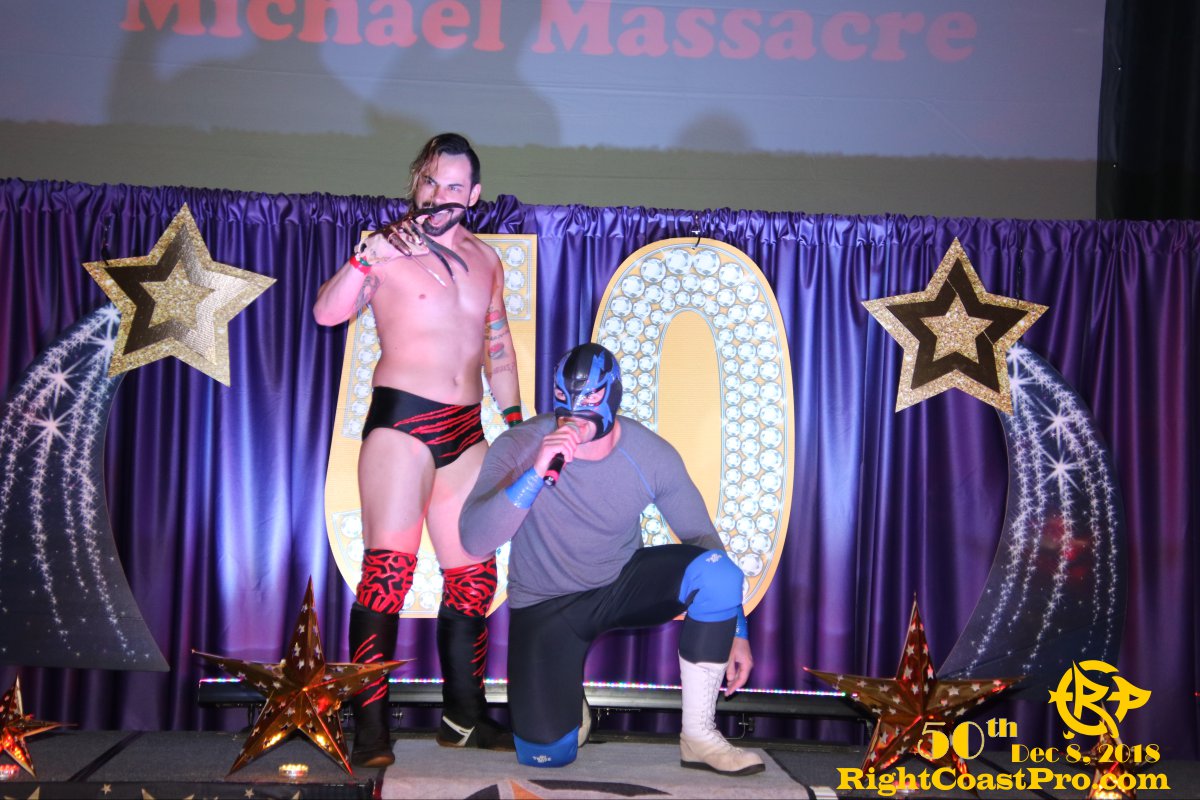 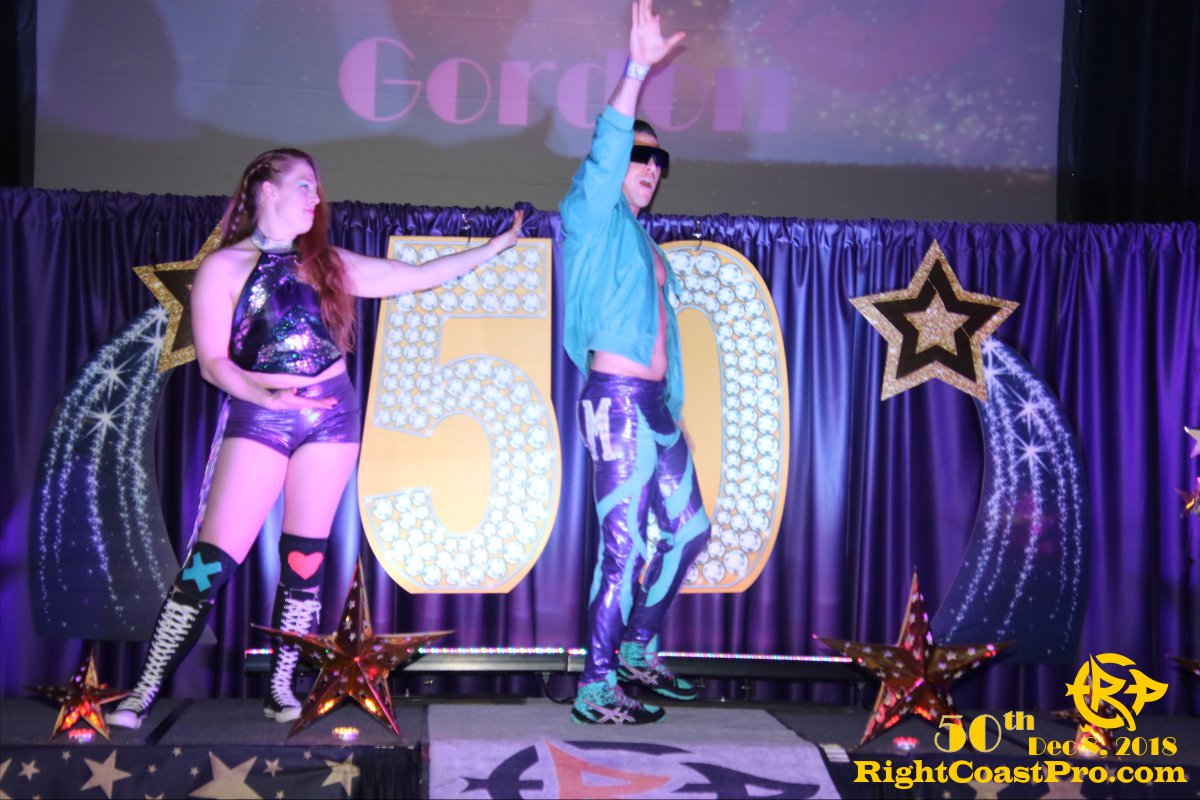 Glamorous Glenn Gordon came into and left Right Coast Pro Wrestling in Delaware’s 50th event still without an in ring victory. Victory was in 3G’s grasp at RCP’s 50th Event Celebration, thanks to the help of Glamazon M. 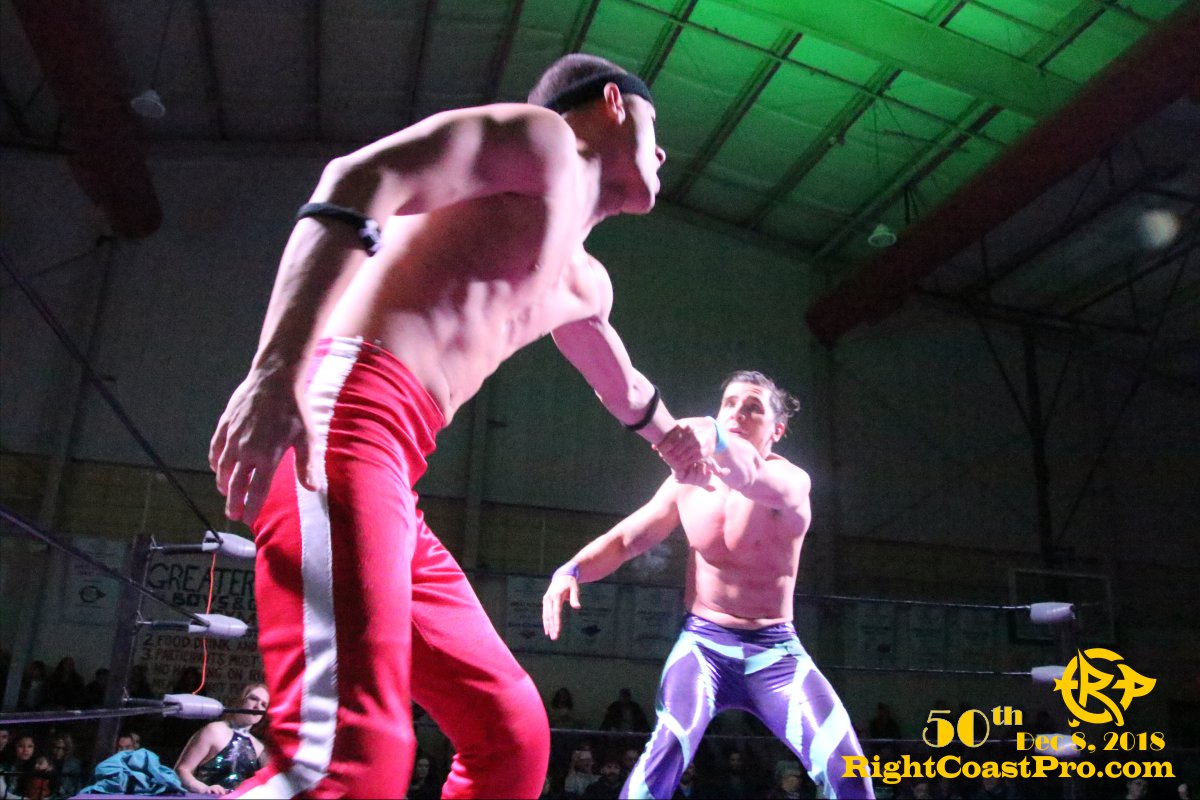 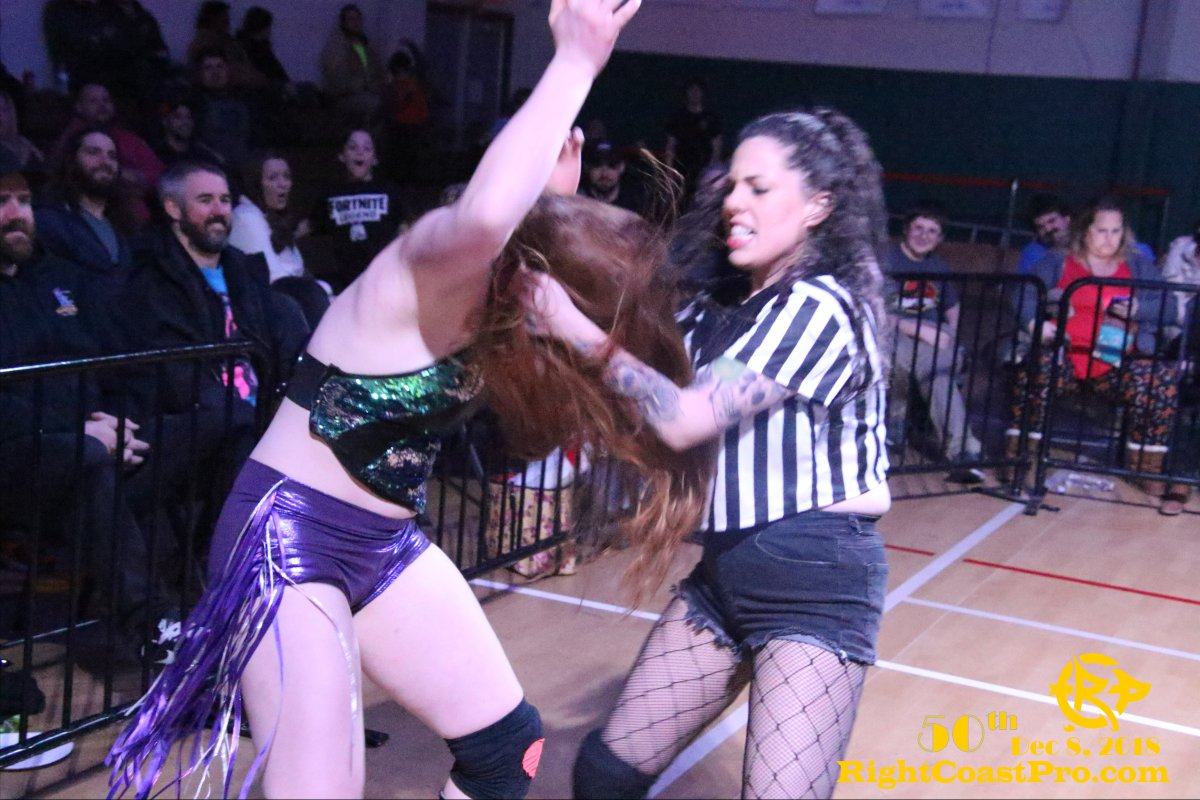 Thankfully Ref Nicki laid the law down on Glamazon M and physically removed her from the combative contest. 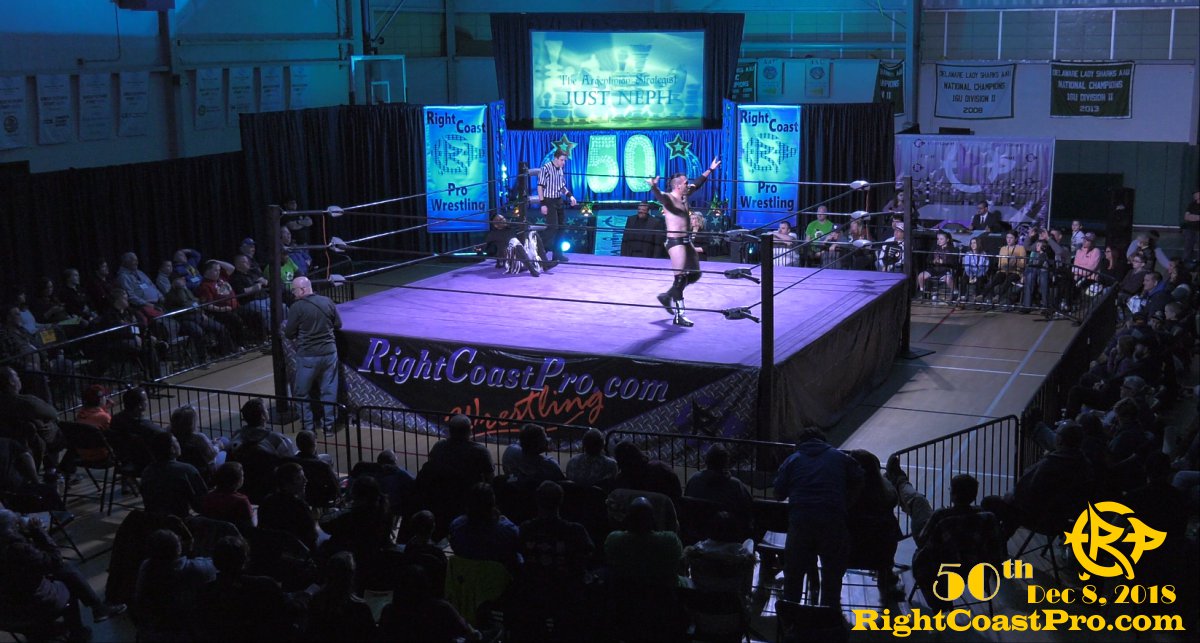 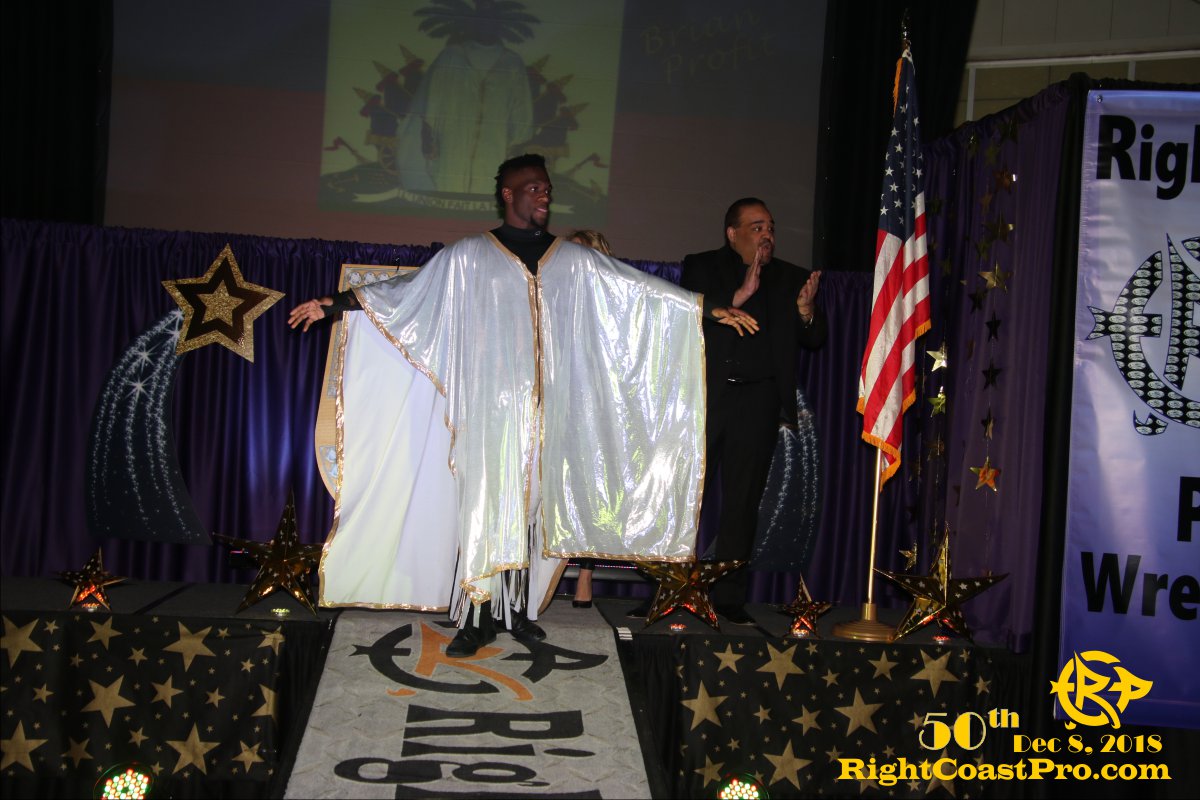 Right Coast Pro Wrestling started its 50th Live Event Celebration with a bang! The Argentinian Strategist Just Neph and The Richest Man in Haiti Brian Profit faced off in RCP’s Opening bout and lived up to the expectations of the RCP Arena faithful’s. It was an evenly matched, extremely competitive match which either combative athlete could have walked out the victor. 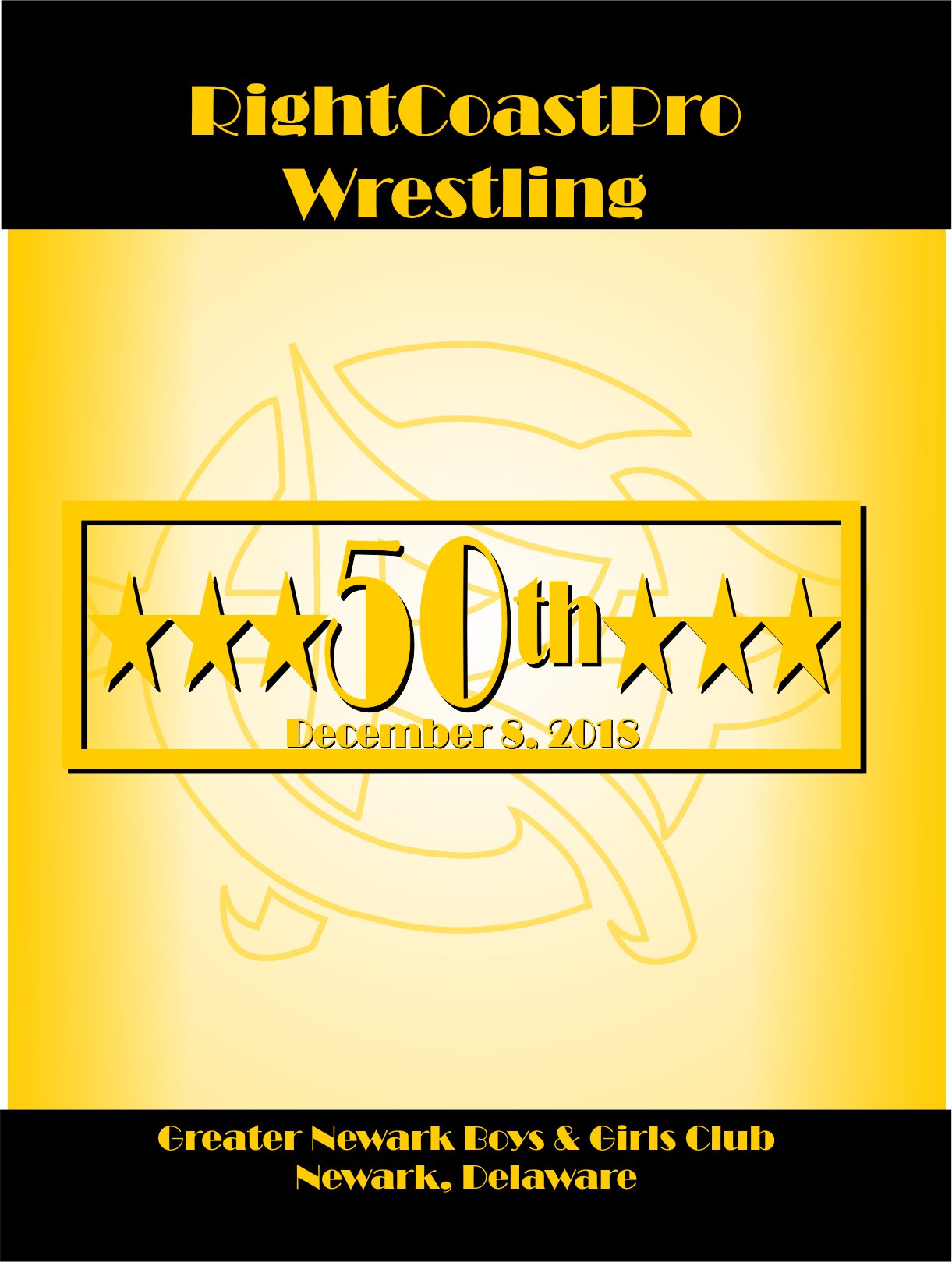 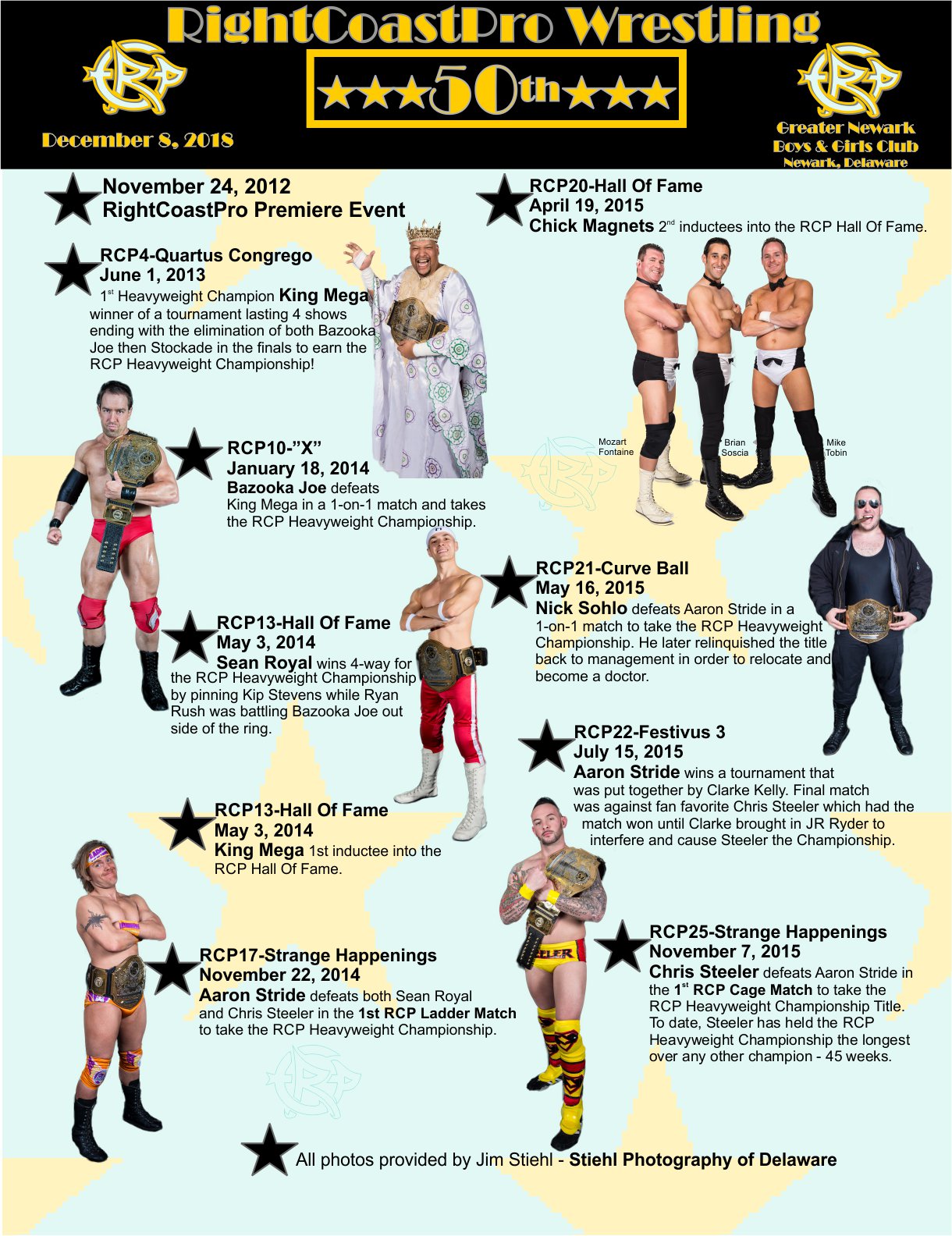 The program contained everything from our first event to our first Heavyweight Champion King Mega, our first Tag Team Champions ‘The Baldwin Brothers’ and our first Olympus Champion ‘Mad Dog’ Dixon as well as a small taste of milestones in between. 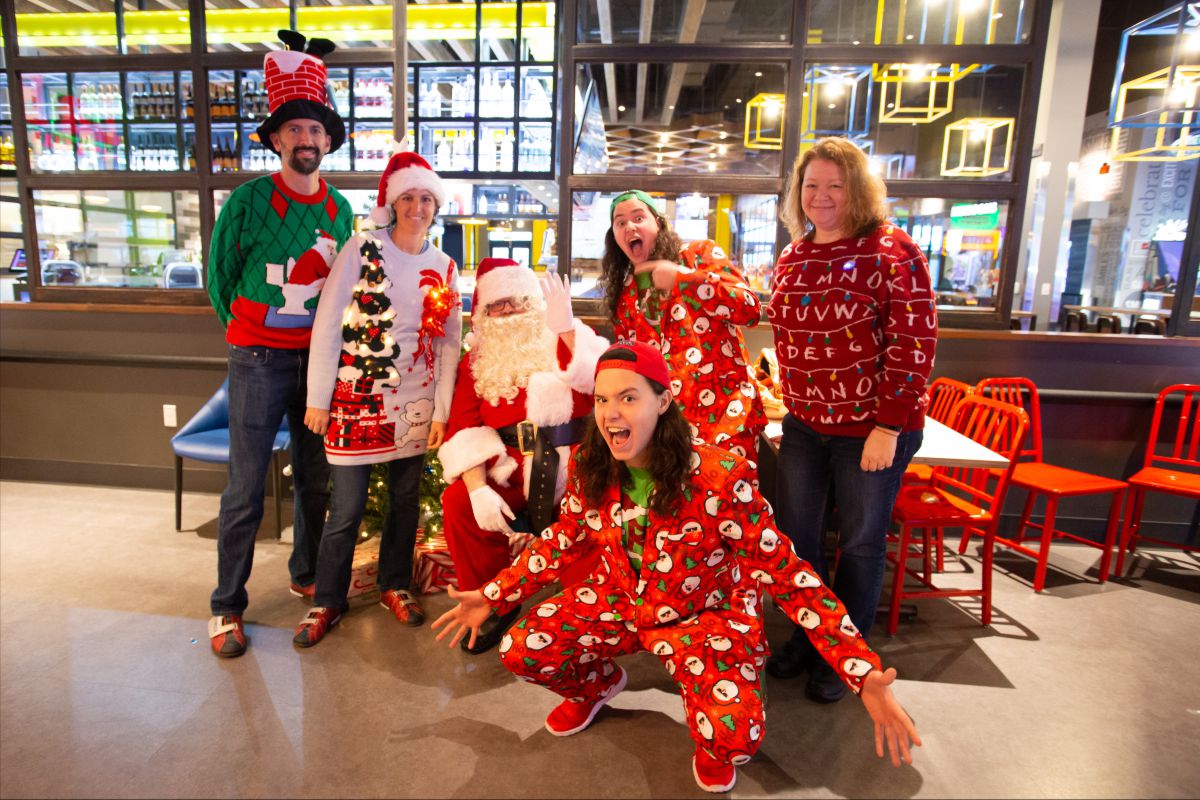 Be sure to lock in your seat and savings for Right Coast Pro Wrestling in Delaware’s 2019 Season! We have had a TREMENDOUS VIP pre-sale for 2019 with over half of our front row already sold out FOR ENTIRE YEAR! Get yours now, and in time for the Holidays, while you still can so you can enjoy all the action at the Greater Newark Boys and Girls Club of Delaware and Kirkwood Sports and Soccer Complex. Paypal is gladly accepted. 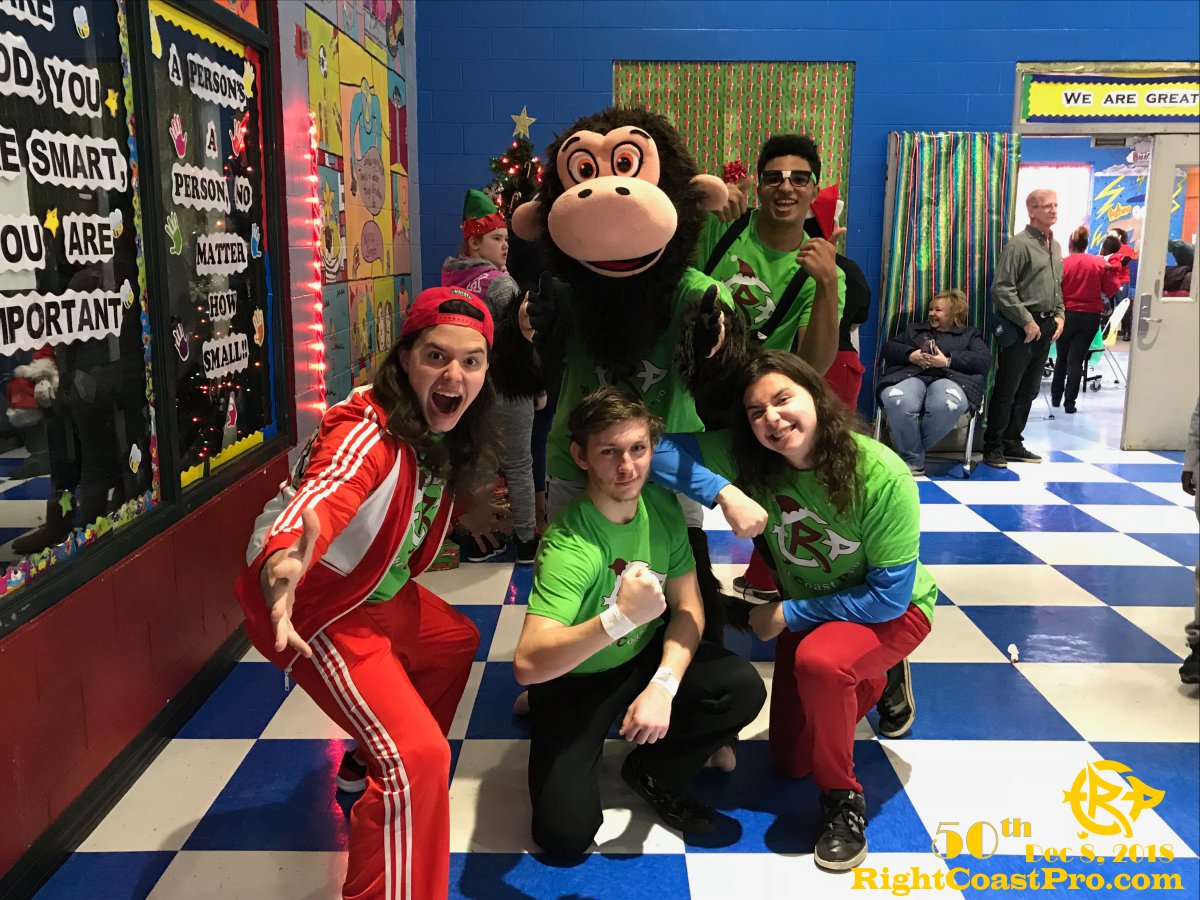 Mascot Coastee led the brigade in joining up with the volunteers from the Delaware City Refinery and Greater Newark Boys and Girls Club in helping kids celebrate Christmas a little early. 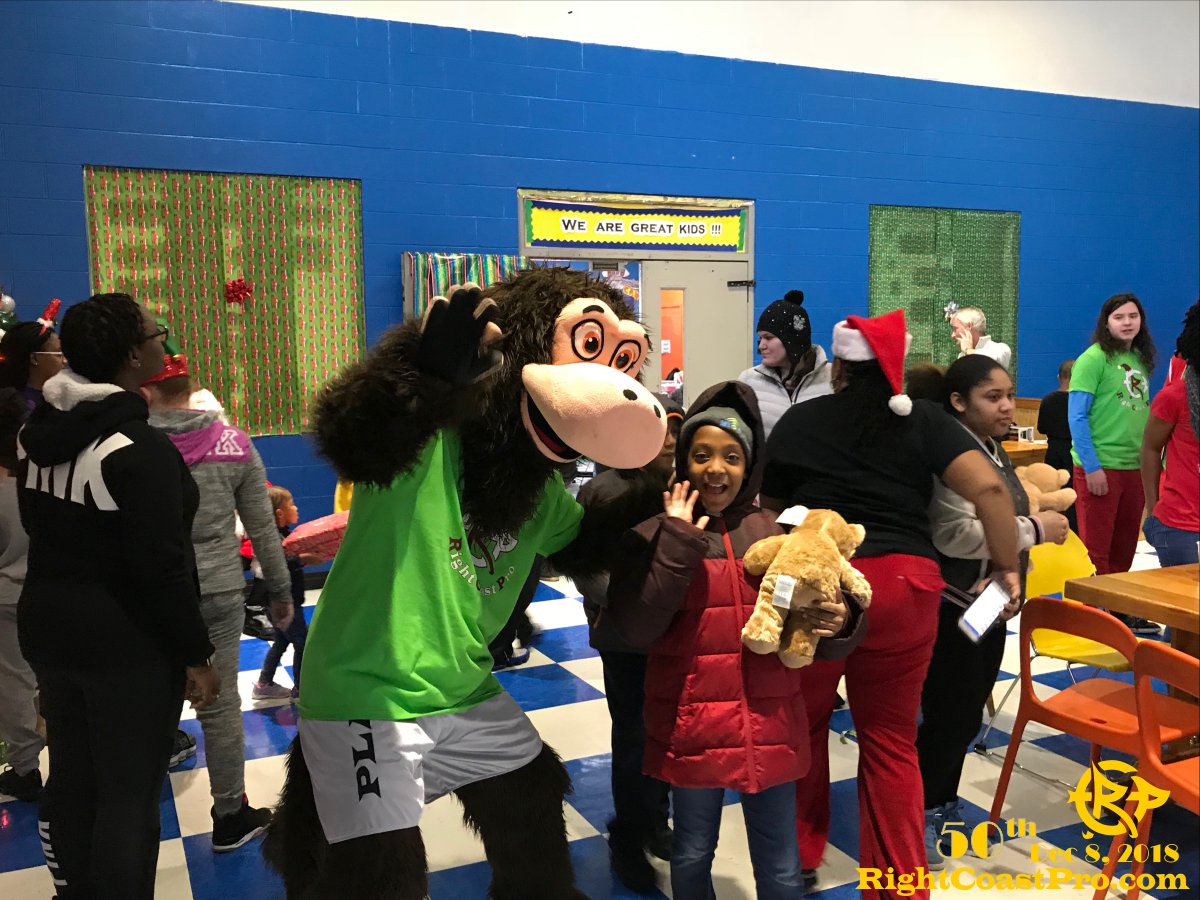 As is a yearly tradition, The Greater Newark Boys and Girls Club hosted Breakfast with Santa for the young members of the club. 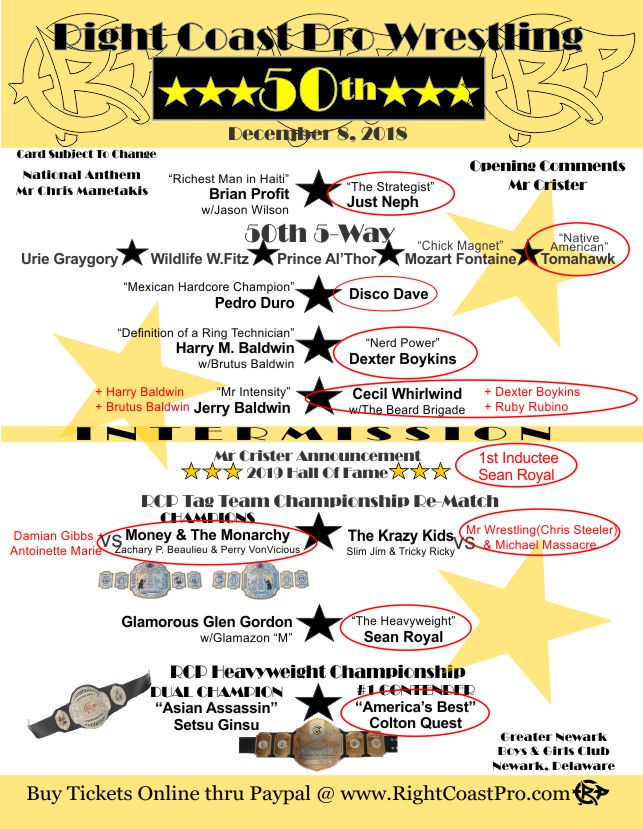 • Chris Steeler returns as a masked wrestler staking a claim on his title!

• RCP Tag Champions Money & The Monarchy use contract loophole to negate The Krazy Kids re-match and hire the team of Mr Wrestling 2099 & Michael Massacre to brutally beat them.

• Money & The Monarchy choose Damian Gibbs and Antoinette Marie as their opponents to defend the RCP Tag Team Championship instead of the Krazy Kids.

• Sean Royal defeats Glamorous Glen Gordan (G.G.G.) even after one of Glens Glamazons throws a foreign object into the ring that he uses as a weapon.

• Dexter Boykins defeats Harry M. Baldwin in a quick match that Baldwin was too confident about!

• Jerry Baldwin joins the other Baldwin brothers in a beat down of Dexter Boykins after he surprisingly pins Harry in the prior match. Cecil Whirlwind comes out of the crowd to save the day as the Baldwin’s retreat to be caught by Ruby Rubino who returns them to the ring and assists with evening the odds! Mr Crister calls for an official match and a 6-man tag ensues. Cecil, Dexter and Ruby get the win over the 3 Baldwin Brothers.

• Disco Dave takes the pin over Pedro Duro after the ref strips Pedro of multiple weapons he had stashed in his gear.

• RCP 50th 5-way match had an added stipulation that if the match was won in under 5 minutes, Mr Crister would offer a title shot to the winner. Urie Graygory, Prince Al’Thor, Mozart Fontaine, Wildlife William Fitz and “The Native American” Tomahawk all battled in and out of the ring until Tomahawk noticed the time and delivered 1 big move to Graygory into a pinning position as the 5 minute buzzer sounded earning himself a title shot at the next show.

• Just Neph takes the win over “The Richest Man in Haiti” Brian Profit. Afterwards, Profit was scolded by his management team “The Jason Wilson Experience” resulting in Profit giving Wilson a huge stunner before walking out, much to the crowds delight.

Right Coast Pro is proud to announce “Heavyweight” Sean Royal as its first inductee into the class of 2019 Delaware Pro Wrestling Hall of Fame.

Right Coast Pro is proud to announce “Heavyweight” Sean Royal as its first inductee into the class of 2019 Delaware Pro Wrestling Hall of Fame. Sean Royal is not only a Delaware Professional Wrestling Legend, but Right Coast Pro’s first and only ‘Triple Crown’ Winner having won the RCP Heavyweight Championship at RCP-13 on May 3, 2014, winning the Tag Team Championship at RCP-29 on April 23, 2016 and the Olympus Championship at RCP-39 on November 4,2017. Sean Royal is not only a tremendous wrestler and locker room leader, his leadership extends to the community where he actively volunteers for a number of charities and charitable organizations. We will announce our second inductee, as well as the 2019 date for Right Coast Pro Wrestling in Delaware’s Hall of Fame induction, soon.

Be sure to visit our Roster Page and Past Events pages for great Stiehl Photography photos and match write-ups.